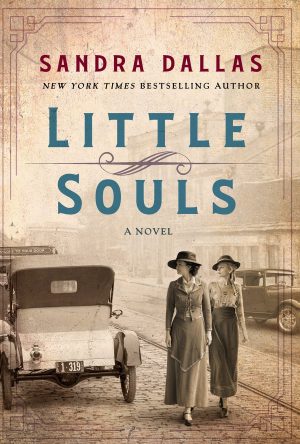 Colorado, 1918. World War I is raging overseas, but it’s the home front battling for survival. With the Spanish Flu rampant, Denver’s schools are converted into hospitals, churches and funeral homes are closed, and horse-drawn wagons collect corpses left in the street. Sisters Helen and Lutie have moved to Denver from Iowa after their parents’ deaths. Helen, a nurse, and Lutie, a carefree advertising designer at a fashionable women’s store share a small, neat house, and each finds a local beau―for Helen a doctor, for Lutie a young student who soon enlists. They make a modest income from a rental apartment in the basement. When their tenant dies from the flu, the sisters are thrust into caring for the woman’s small daughter, Dorothy. Soon after, Lutie comes home from work and discovers a dead man on their kitchen floor and Helen standing above the body, an icepick in hand. She has no doubt Helen killed the man―Dorothy’s father―in self-defense, but she knows that will be hard to prove. They decide to leave the body in the street, hoping to disguise it as a flu victim.

Meanwhile Lutie also worries about her fiancé “over there.” As it happens, his wealthy mother harbors a secret of her own and helps the sisters as the danger deepens, from both the murder investigation and the outbreak.

Set against the backdrop of an epidemic that feels all too familiar, Little Souls is a compelling tale of sisterhood and of the sacrifices people make to protect those they love most.

Set in the time of the 1918 Spanish Flu pandemic, the story follows the lives of two sisters, Helen and Lutie, who move to Denver from Iowa after their parents’ deaths. As the flu ravages the city, the sisters find themselves thrust into caring for a small child, Dorothy, whose mother has died from the disease. When it becomes clear that Helen killed Dorothy’s father in self-defense, the sisters must go to great lengths to keep the truth hidden.

Sandra Dallas is a master of Historical Fiction, and Little Souls is a prime example of her talent for weaving together fact and fiction to create a compelling story.

Little Souls is a heart-wrenching, yet uplifting story of love, loss, and hope against one of America’s deadliest epidemics. With its timely themes, this novel will resonate with readers long after the last page is turned.

I received a complimentary copy of this book from St. Martin’s Press through NetGalley. The opinions in this review are entirely my own.

Sandra Dallas, dubbed “a quintessential American voice” in Vogue Magazine, is the author of over a dozen novels, including Prayers for Sale and Tallgrass, many translated into a dozen languages and optioned for films.  She has two daughters and lives with her husband in Denver and Georgetown, Colorado.

“[Dallas is] also a Colorado literary pillar, having appraised nearly every Colorado book worth reading in recent years―and writing more than a few of them herself.” ―The Denver Post

“Exhilarating and hard to resist.” ―Katherine Powers, The Washington Post on Westering Women