The League of Gentlewomen Witches 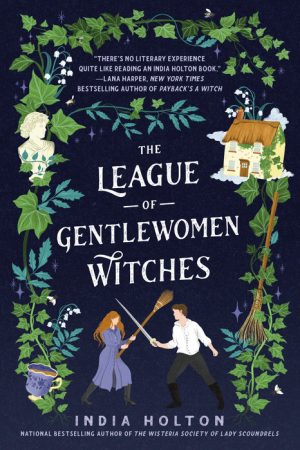 Just when you thought it was safe to go back into the teahouse. . . .

Miss Charlotte Pettifer belongs to a secret league of women skilled in the subtle arts. That is to say—although it must never be said—witchcraft. The League of Gentlewomen Witches strives to improve the world in small ways. Using magic, they tidy, correct, and manipulate according to their notions of what is proper, entirely unlike those reprobates in the Wisteria Society.

When the long lost amulet of Black Beryl is discovered, it is up to Charlotte, as the future leader of the League, to make sure the powerful talisman does not fall into the wrong hands. Therefore, it is most unfortunate when she crosses paths with Alex O’Riley, a pirate who is no Mr. Darcy. With all the world scrambling after the amulet, Alex and Charlotte join forces to steal it together. If only they could keep their pickpocketing hands to themselves! If Alex’s not careful, he might just steal something else—such as Charlotte’s heart.

India Holton lives in New Zealand, where she’s enjoyed the typical Kiwi lifestyle of wandering around forests, living barefoot on islands, and messing about in boats. Now she lives in a cottage near the sea, writing books about uppity women and charming rogues, and drinking too much tea.