The Memory of You 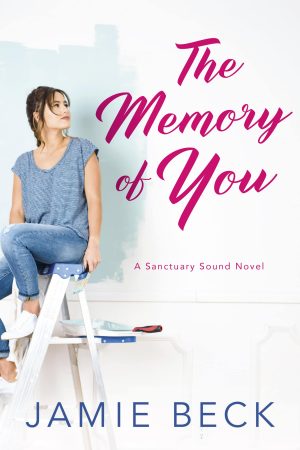 When Steffi Lockwood returns to Sanctuary Sound to start over, she has no idea she’ll also get a second chance with her first love.
Steffi Lockwood has survived more than most. Recovering from an assault, she returns to her coastal Connecticut hometown to rebuild her life the best way she knows how: with her hands. But starting a remodeling business with one longtime friend puts her in the middle of a rift with another. Worse, being hired by her ex-boyfriend’s mother forces her to confront old regrets.
Public defender Ryan Quinn wasn’t shocked when his wife left him, but he was floored when she abandoned their daughter. With his finances up in the air, the newly single dad returns to his childhood home in Sanctuary Sound. The last person he expects, or wants, to see working on his family house is Steffi Lockwood—his first love who shattered his heart.
Although Steffi and Ryan are different people now, dormant feelings rekindle. But when Steffi’s secrets begins to surface, will it bring them together…or tear them apart for good?

Jamie Beck is a Wall Street Journal and USA Today bestselling author. Her realistic and heartwarming stories have sold more than two million copies. She is a two-time Booksellers’ Best Award finalist and a National Readers’ Choice Award winner, and critics at Kirkus, Publishers Weekly, and Booklist have respectively called her work “smart,” “uplifting,” and “entertaining.

“I do understand, Emmy. Better than you think.” Steffi took the partially folded tarp and snapped its final fold on her own, then crouched to Emmy’s eye level. “I wasn’t much older than you when my mom died. I missed her so much it felt like the whole world turned into a dark black hole.

1 thought on “The Memory Of You”