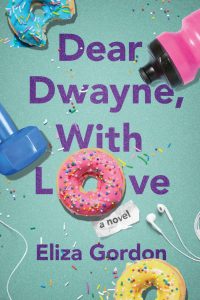 Wannabe actress Dani Steele’s résumé resembles a cautionary tale on how not to be famous. She’s pushing thirty and stuck in a dead-end insurance job, and her relationship status is holding at uncommitted.

With unbearably perfect sisters and a mother who won’t let her forget it, Dani has two go-tos for consolation: maple scones and a blog in which she pours her heart out to her celebrity idol. He’s the man her father never was, no boyfriend will ever be—and not so impossible a dream as one might think. When Dani learns that he’s planning a fund-raising event where the winning amateur athlete gets a walk-on in his new film, she decides to trade pastries and self-doubt for running shoes and a sexy British trainer with adorable knees.

But when Dani’s plot takes an unexpected twist, she realizes that her happy ending might have to be improvised—and that proving herself to her idol isn’t half as important as proving something to herself.

This is a work of fiction. While Dwayne Johnson p/k/a The Rock is a real person, events relating to him in the book are a product of the author’s imagination. Mr. Johnson is not affiliated with this book, and has not endorsed it or participated in any manner in connection with this book.

Dear Dwayne With Love is one of the funniest romantic comedy I’ve ever read.

The story follows Danielle Steele with an e (whose name is practically her mother’s tribute to the famous author) and her obsession/ infatuation with Dwayne “The Rock” Johnson.

In this book, Eliza Gordon presents an amazing cast of characters and through Dani’s point of view, introduces the reader to her lovely, and very often eccentric and funny world.

Love is mercurial in the acting world

Danielle struggles to find her path and hopefully the so desired success in the acting world while being in a no sense relationship and doing a suffocating part-time job, which at least allows her to pay the bills. Anyway, she can always count on her family, that even with some oddity profoundly loves her, dear friends, and the perfect idealization of DJ.

During the narration, we learn about Dani’s weaknesses, and find more about her insecurities… but always with an ironic tone.

In this book, Eliza Gordon describes all the events with different narrative techniques which make the reading process very quick and interesting. In fact, some chapters are structured like online diaries entries, others like emails, texts or faxes (which are the only technological communication tools used by Dani’s mother, Penelope “Mommy” Steele).

And every time I walk into one of these bookstores to pick up these damn books, as soon as they find out I’m Penelope “ Mommy” Steele’s daughter . . . Oh, your mom is so amazing and funny. I’ll bet you just had the greatest childhood. Sure. The greatest. Should we recap the time my homecoming date stood me up because my mother had interrogated him the night before about why he didn’t believe in the Greys? (From Wikipedia: Grey aliens, also referred to as “Alien Greys,”“Greys,”“Grays,”“Roswell Greys,” and “Zeta Reticulans,” are alleged extraterrestrial beings whose existence is promoted in ufological, paranormal, and New Age communities, and who are named for their unique skin color. Forty-three percent of all reported alien encounters in the United States describe Grey aliens.) On the following Monday, my locker was covered in Xeroxed pictures of ET.

Also, I really like the imaginary dialogues Dani has with her idol, who encourages and offers her a right perspective.

But when Dani decides to participate in a charity event sponsored by Dwayne “The Rock” Johnson, she will finally need to completely reorganize her life routine and enjoy the challenge.

After forty-five awkward minutes and several pointed comments about how I’m actually really lucky because my options are so much greater since “not very many women wear a shoe size 10 or 11,”Susie talks me into two pairs: a zero-drop shoe for the gym (“It will help you keep your balance, like being barefoot, when you’re squatting and deadlifting”—I have no idea what either of those things involve, but I’m guessing one might be for pooping and the other might be for carrying a corpse).

Dear Dwayne, with love is romantic and hilarious and lives up to every promise. And after laughing so much and enjoying the unexpected turn of events…I can assure you won’t be able to put the book down.

Right now, I cannot wait to read other novels by Eliza Gordon.

Thanks to NetGalley and the publisher for providing me with an ARC in exchange for an honest review.

Eliza Gordon has excellent taste in books, shoes, movies, and friends, and questionable sanity in the realm of love. Best leave that one alone.

In real life, she’s a copy/line editor, mom, wife, bibliophile, and proud parent of one very spoiled tuxedo cat. Eliza writes stories to help you believe in the Happily Ever After; Jennifer Sommersby, her other self, writes young adult.

Both personalities are represented by Daniel Lazar at Writers House Literary Agency.