Truth and Other Lies 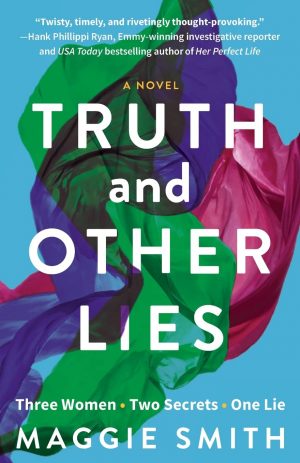 The Devil Wears Prada meets All the President’s Men

Megan Barnes’ life is in free fall. After losing both her job as a reporter and her boyfriend in the same day, she retreats to Chicago and moves in with Helen, her over-protective mother. Before long, the two are clashing over everything from pro-choice to #MeToo, not to mention Helen’s run for U.S. Congress, which puts Megan’s career on hold until after the election.

Desperate to reboot her life, Megan gets her chance when an altercation at a campus rally brings her face-to-face with Pulitzer Prize-winning journalist Jocelyn Jones, who offers her a job on her PR team. Before long, Megan is pulled into the heady world of fame and glamour her charismatic new mentor represents.

Until an anonymous tweet brings it all crashing down. To salvage Jocelyn’s reputation, Megan must locate the online troll and expose the lies. But when the trail leads to blackmail, and circles back to her own mother, Megan realizes if she pulls any harder on this thread, what should have been the scoop of her career could unravel into a tabloid nightmare.

Readers who love Jodi Picoult’s topical plot twists and Liane Moriarty’s character-driven novels will devour this fast-paced tale of three women whose lives converge as one fights a devastating accusation, another campaigns for a contested seat in Congress, and one, the young reporter with ties to both, navigates the tricky line between secrets and lies.

Maggie Smith began her career as a nursery teacher in Birmingham.  Maggie currently works part-time as an Area SENCO supporting Special Needs Co-ordinators and managers in a range of early year’s settings. She is also one half of ‘early matters’ training and consultancy, is co-author of the Hands-on Guides series of books, and writes for various early years’ publications.

Truth and Other Lies is my favorite kind of novel-one that tackles tough topics in a breezy, compulsively readable way. Maggie Smith is a welcome new voice in fiction.-Camille Pagán, bestselling author of Don’t Make Me Turn This Life Around