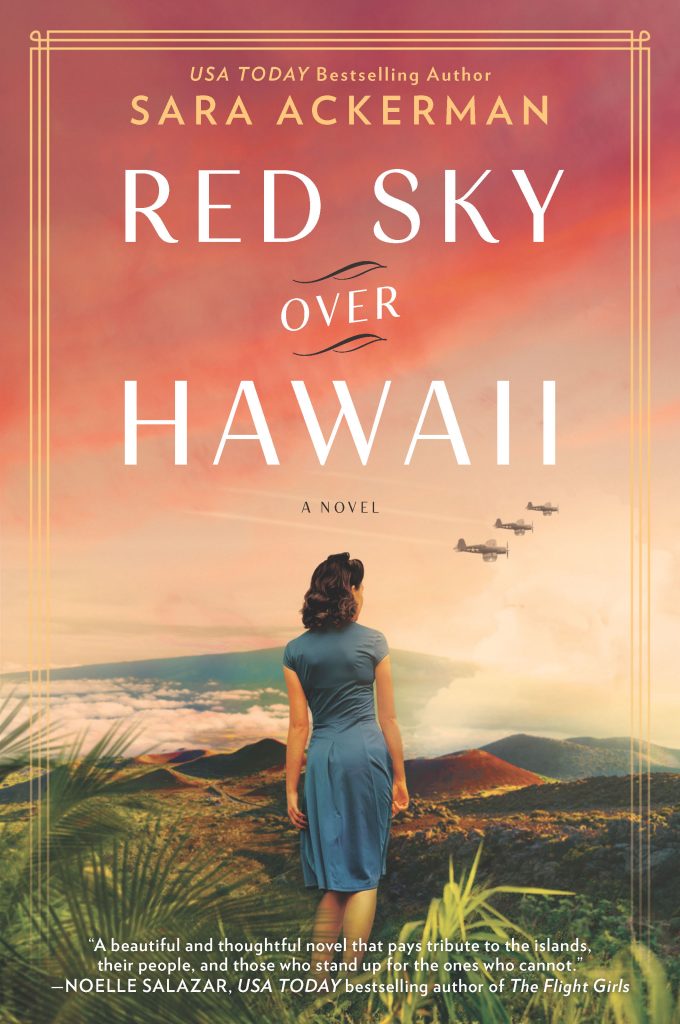 A Novel
by Sara Ackerman

For fans of Chanel Cleeton and Beatriz Williams, RED SKY OVER HAWAII is a historical women’s fiction set in the islands during WWII. It’s the story of a woman who has to put her safety and her heart on the line when she becomes the unexpected guardian of a misfit group and decides to hide with them in a secret home in the forest on Kilauea Volcano.

The attack on Pearl Harbor changes everything for Lana Hitchcock. Arriving home on the Big Island too late to reconcile with her estranged father, all she can do is untangle the clues of his legacy, which lead to a secret property in the forest on Kilauea Volcano. America has been drawn into WWII, and amid rumors of impending invasion, the army places the islands under martial law. When they start taking away neighbors as possible sympathizers, Lana finds herself suddenly guardian to two girls, as well as accomplice to an old family friend who is Japanese, along with his son. In a heartbeat, she makes the decision to go into hiding with them all.

The hideaway house is not what Lana expected, revealing its secrets slowly, and things become even more complicated by the interest of Major Grant Bailey, a soldier from the nearby internment camp. Lana is drawn to him, too, but needs to protect her little group. With a little help from the magic on the volcano, Lana finds she can open her bruised heart to the children–and maybe to Grant.

Red Sky Over Hawaii is a lush and evocative novel about doing what is right against the odds, following your heart, and what makes a family.

Sara Ackerman is the USA Today bestselling author of The Lieutenant’s Nurse and Island of Sweet Pies and Soldiers. Born and raised in Hawaii, she studied journalism and earned graduate degrees in psychology and Chinese medicine. She blames Hawaii for her addiction to writing, and sees no end to its untapped stories. When she’s not writing or teaching, you’ll find her in the mountains or in the ocean. She currently lives on the Big Island with her boyfriend and a houseful of bossy animals.

WITH EVERY MILE CLOSER TO VOLCANO, THE FOG thickened, until they were driving through a forest of white gauze with the occasional branch showing through. Lana considered turning the truck around no less than forty-six times. Going back to Hilo would have been the prudent thing to do, but this was not a time for prudence. Of that she was sure. She slowed the Chevy to a crawl and checked the rearview mirror. The cage with the geese was now invisible, and she could barely make out the dog’s big black spots.

“Set against the backdrop of the attack on Pearl Harbor, The Lieutenant’s Nurse is an emotional and heartfelt tale of love and courage. Depicting a dramatic period in history, Ackerman’s richly detailed and evocative writing transports the reader, bringing Hawaii to life.” —Chanel Cleeton, USA TODAY bestselling author of Next Year in Havana

“With effortless prose, Ackerman skillfully navigates the early days of WWII with captivating characters bonded by circumstance. Mystery and magic are woven around Lana and the pages of this book, delivering a beautiful and thoughtful novel that pays tribute to the lore of the islands, their people, and those who stand up for the ones who cannot.” –Noelle Salazar, bestselling author of The Flight Girls on RED SKY OVER HAWAII

“The Lieutenant’s Nurse illuminates the attack on Pearl Harbor with a riveting drama told from a unique perspective. Sara Ackerman brings a time and place to vivid life, putting a human and heroic face on events that changed history. I savored every page!” —Susan Wiggs, #1 New York Times bestselling author