The Dressmaker of Dachau 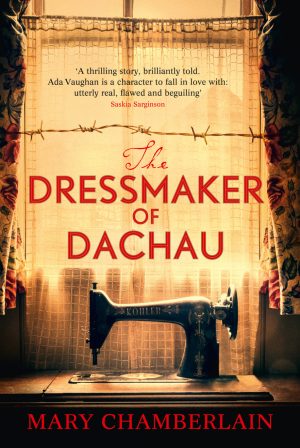 Spanning the intense years of war, The Dressmaker of Dachau is a dramatic tale of love, conflict, betrayal and survival. It is the compelling story of one young woman’s resolve to endure and of the choices she must make at every turn – choices which will contain truths she must confront.

London, spring 1939. Eighteen-year-old Ada Vaughan, a beautiful and ambitious seamstress, has just started work for a modiste in Dover Street.
A career in couture is hers for the taking – she has the skill and the drive – if only she can break free from the dreariness of family life in Lambeth.

A chance meeting with the enigmatic Stanislaus von Lieben catapults Ada into a world of glamour and romance. When he suggests a trip to Paris, Ada is blind to all the warnings of war on the continent: this is her chance for a new start.

Anticipation turns to despair when war is declared and the two are trapped in France. After the Nazis invade, Stanislaus abandons her. Ada is taken prisoner and forced to survive the only way she knows how: by being a dressmaker. It is a decision that will haunt her during the war and its devastating aftermath.

For readers of THE TATTOOIST OF AUSCHWITZ and THE LIBRARIAN OF AUSCHWITZ, The Dressmaker of Dachau is a powerful and moving story of courage and resilience, betrayal and passion.

THE DRESSMAKER OF DACHAU was published by the Borough Press, HarperCollins in 2015 and (under the title THE DRESSMAKER’S WAR) Random House in the USA, and has sold to 19 countries.

This book turned out to be a surprising reading. Set during the Second World War, The Dressmaker of Dachau follows the life of the young, talented, ambitious, and dreamy seamstress and model Ada Vaughan.

Her dreams will lead to the fascinating Paris with the enigmatic Stanislaus von Lieben. But this new start will completely overthrow her dreams and her conception of the life in a now declared war. What indeed makes this a unique novel is the ability to observe how the human soul reacts to situations that aim to annihilate the individual. Ada clings to her dreams, the same dreams that can help her feel still alive and remind her of her past, of her life before the war and give her hope for the future, to make her believe that she can still open her “Maison Vaughan”. So, through small daily gestures, Ada decides to fight because she still wants to live and feel alive, even though she has to make compromises.

Yet, another important theme of this novel emerges after the war. After returning home, people cannot share their experiences of the war. They prefer to forget or hide their own lives rather than re-opening painful and uncomfortable wounds. Ada, like many others, prefers to throw herself into a new, seemingly normal life. But the pain, albeit silent, is like a bomb ready to explode.

The Dressmaker of Dachau is absolutely a highly recommended read.

Mary Chamberlain is a novelist and historian, author of the international best-seller,  The Dressmaker of Dachau (UK) / The Dressmaker’s War (USA). Published in the UK in 2015, and in the USA in 2016, it has now sold worldwide to 19 countries. Her second novel, The Hidden, was published by OneWorld in February 2019 and was a Sunday Times must read choice of the best recent books. She is currently working on another historical novel for publication in 2021 or 2022.

Mary Chamberlain’s passion in life has been writing, and her two great loves are history and literature.

“There are still so many questions from the past that remain unanswered, so much that we need to understand. Fiction is another way into that understanding, can open imaginative doors that may be closed to historians. Without knowing our history, we cannot know ourselves.”

“Mary Chamberlain’s haunting and poignant debut work of fiction is one readers will carry with them for years to come.”  The Historical Novels Society